Organised by the Macao Museum of Art (MAM) of the Cultural Affairs Bureau (IC), in cooperation with the Architects Association of Macau (AAM), the exhibition of “Unintended Architecture – Exhibits from Macao, China” is ready to be showcased at the 16th International Architecture Exhibition - La Biennale di Venezia, starting on 26 May in Venice, Italy, which will introduce Macao’s characteristic “Freespace” through abstract means to audiences from around the world.

The International Architecture Exhibition - La Biennale di Venezia was first held in 1980 and is one of the most influential international events in architectural arts and academia, providing an important communication platform for architecture and for cultural exchanges. Since 2014, IC has twice organised the participation of local architects in this great event. This year, IC strives once again to present projects by Macao architects in the international arena. Following a meticulous assessment of the eight projects for the Biennale Architettura 2018, the jury selected the project curated by Manuel Lam Lap Yan and authored by architects Eddie Ieong Chong Tat, Vong Ka Ian and Benny Chu Hou San, who will thus represent Macao as a Collateral Event at the 16th International Architecture Exhibition of La Biennale di Venezia. The architects of the selected team have an average age of 30.

In order to answer the theme “Freespace” of the 16th International Architecture Exhibition – La Biennale di Venezia, the team probed into spaces with local flavour and explored elements of interaction between people and daily spaces: from the open air market at Rua da Emenda, the pathways of Lou Lim Ieoc Garden, the densely populated high-rise buildings, up to the stairway of the Ruins of St. Paul’s, the “interaction” existing within these places inadvertently creates a characteristic space that blends with daily life and a sense of human touch. It was precisely in this manner that the team conceived the concept of “Unintended Architecture”.

Moderation in architectural design leaves room for people to intervene, participate, and spread out. The exhibition used acrylic and metal plates to build the “playing cards” which symbolise Macao’s swift economic development.

Through different sizes, shapes, textures and arrangements, the “playing cards” transform and leave blank (white space) in complex spaces, simplifying them into elements that symbolise Macao and creating four exhibition spaces with four different themes. The blanks allow viewers to project their own feelings, memories and imagination, thereby experiencing the “Unintended Architecture”, perceiving spatial traits through interaction and reflecting on the harmonious relationship established between people and space.

The work drew on the characteristics of Macao and incorporated elements of cultural value, revealing an image of Macao in a perceptual manner and displaying the traditions in a new way, having therefore a great deal of interest and unity. The work revealed considerable maturity in terms of architectural language and representation and was also able to highlight the uniqueness of Macao’s cultural characteristics. The message brought by the exhibition is thought-provoking, that the blank space is the freespace pursued by people in everyday life and it is also a space for architects to showcase their creativity. The Director of MAM, Chan Kai Chon, believes that the imagined “freespace” reflected in the work shows the world the team’s cultural confidence and their latest perception of the society as well as an imagined future.

The exhibition “Unintended Architecture” runs from 26th May to 25th November, daily from 10am to 6pm (local time) and closes on Mondays. The exhibition hall is located in front of the Arsenale, one of the main Biennale Exhibition venue, with address at Arsenale, Campo della Tana, Castello 2126/A, Venice, Italy. 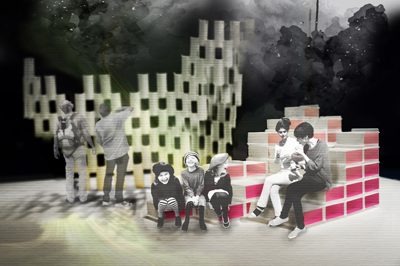 The "interaction" between people and space endue a profound meaning, which we named it "Unintended Architecture". 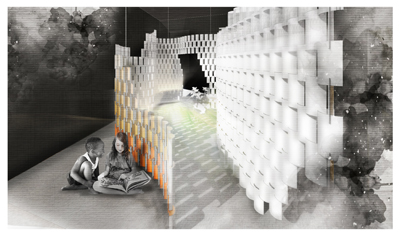 By manipulating "playing cards" in different forms and combinations, "Unintended Architecture" will be re-illustrated in an abstract manner. 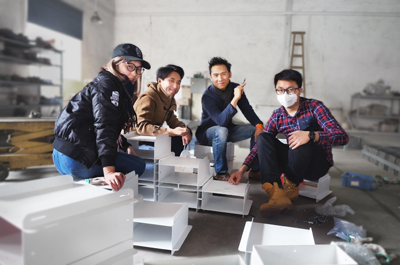