The Andorran Pavilion presents a provocative proposal of speculative fiction in which Philippe Shangti rouses the collective consciousness with his vision of the world. It is a fragmented installation of bits and snatches which should be examined separately in order to understand this multidisciplinary project: a criticism of exacerbated consumerism and its effects.

In the purest camp style, it sets before us universal topics using bright surfaces, saturated colours and clean perfect finishes, seeking all the while to protest and to provoke.

Philippe Shanti is a multifaceted artist. He was born in in Toulouse (France) in 1983 and he lives in Andorra. Shangti's passion for photography arose at a very early age, when he was given his first camera, which he came to use extensively. Later, his bold character and life itself led him to Saint-Tropez, where he came upon a world that took drugs and concealed itself in superficiality. He dared to portray it, showing women marked by a confusion of vulnerability and strength, as may be seen in the monumental photograph Goddess of Oxygen, depicting a woman entwined between what is divine and that which is most purely materialistic, doing business with the very air we breathe. 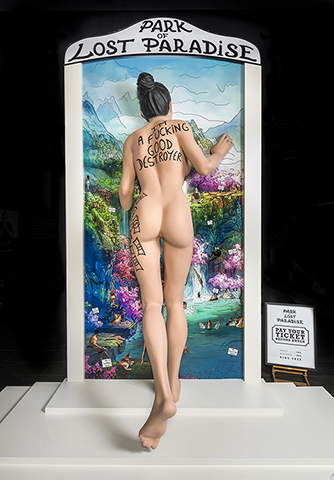 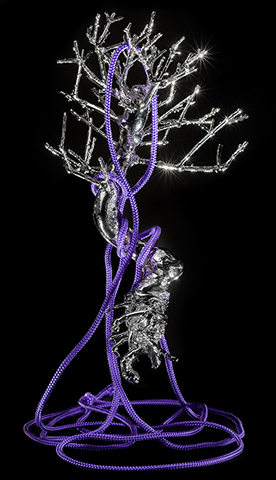 Both "Gate of Lost Paradise Park" and "Soul Tree Museum" portray plainly evil actions and the consequences of our misguided way of doing things.

Throughout this project, Shangti builds a story that has been meticulously conceived, drawing its inspiration from James Bidgood and David LaChapelle, whose works also criticise the society in which we live.

The use of writing in Philippe Shangti's work and specifically his tags generate a message that is conveyed with great celerity and in a multidisciplinary manner. In this way, in addition to using photography and sculpture, he also moves in the audiovisual world.

"Prison of for Spender Addict" is a kitsch video sculpture that could be associated with the work of Dan Graham or Bill Viola.

Shangti's project, with its joyful colours and hilarious compositions, is set within the framework of the metalanguage of art and draws us closer to the contemporary aesthetic of pop art, just as may be seen in No Vandalism Here, The Babies’ Hope and Fuck Who doesn’t Like My Vision.

It is an invitation to reconsider the consumerist present which is leading us towards a precarious future that is already all too near...

As the last year, the Andorran Pavilion at the 58th International Art Exhibition - La Biennale di Venezia will be located in Istituto Santa Maria della Pietà, a former convent, orphanage and music academy. The church was built in the 18th century by Giorgio Massari and was not only used as a place of worship but also as a concert hall. The Italian Baroque composer, Antonio Vivaldi, worked there as the choir director, writing many cantata and teaching at the seminary.

The church is situated in the Castello neighbourhood in Riva degli Schiavoni, a five-minute walk from Piazza San Marco. The Pavilion has two separate entrances. The main one opens from the side of the church on to Calle della Pietà street and the second one can be reached from inside the church’s chapel itself.

to get more news and infos about the upcoming exhibitions!

Ministry of Culture, Youth and Sport