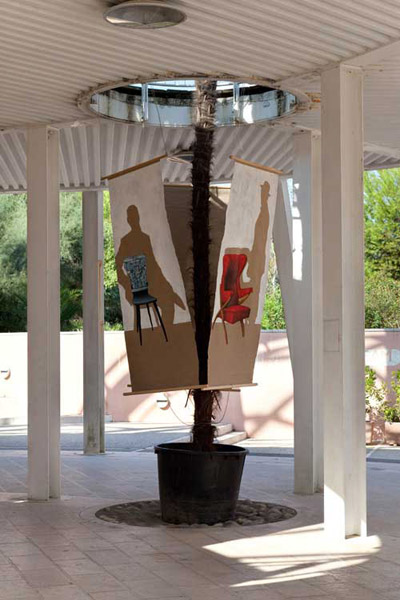 When Palosuo started painting landscapes there were no wide vistas or open skies. Palosuo’s take on the landscape is a well arranged, closely sealed part of one rather cultivated than wild forest. The composition is balanced, close-up and very theatrical. The carefully arranged tree trunks and the dark foliage covering them lead us to the theatre stage itself, to its decors. The narrow palette, mostly being blue and dark blue suggests us nocturnal scenes. The alternative, pale white, gives them an airy, foggy quality, almost unreal – or the feeling of old, paled photographs. There is at the same time something familiar and something uncanny about them. Like the forest they are at the same time sheltering and intimidating. You cannot take your eyes out of them. His paintings seem to be born under a bigger idea, a whole concept at the time. This is also something that is seen in his naming of works, which clearly is important for him, they oftencome in groups under a bigger theme. Once he started involving the canvas the road was clear. With just two colours there were three possibilities: the brown canvas itself, all the blue tones and the light white. In combining these three, painting the very same motif three times and placing them next to one another, he accomplishes a wide and changing variety of modes and feelings. The idea of repetition and the impact it has, as we know, is very strong. This concept is well seen in the series When the Truth Lies from 2006, where the same motif is seen in three different renderings. However, a couple of years later he already places together a series of different motifs under the same title and groups them interestingly together as a whole. One of his latest works, and one that he actually still keeps adding pieces to, My Life was a Burning Illusion from 2008, is by now made up of a couple of dozens of paintings and the motifs vary from a tree in full bloom to bare tree trunks to tiny plants and a young boy swinging. The combination I saw was made up of twelve pieces and I realized the endless possibilities in combining and arranging the canvases in a way one chooses for oneself. Also another thing hit me, now that he combined different motifs he could no longer combine various colour schemes, these are all painted in different tones of blue against the brown canvas itself. A completely new element emerged at the beginning of 2008 juxtaposing the strong, thick tree trunks: tiny, delicate wild plants and ordinary weeds. These flowering plants sway on thin stems and seem to be blowing with the wind. They are outspokenly beautiful and romantic, but at the same time they tell of their strong will to break out of the earth, to survive, develop and bloom while reaching up towards the heaven like the trees themselves. Big or small, the artist sees and captures it all with the same interest. In these paintings the real interest lies not on the surface of the painting, so to say, but beyond, in a world we can only try reaching for.