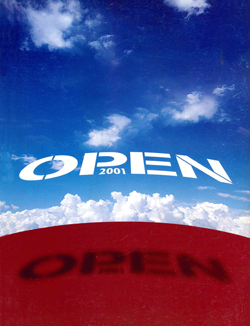 4. International Exhibition of Sculptures and Installations

OPEN2OO1, International Exhibition of Sculptures and Installations, being held on the Venice Lido from 29th August, aims to encourage interchange between cinematography and the other arts. This year’s subject is “The Globalisation of Culture”.

The event has been organised by Arte Communications, chaired by Paolo De Grandis in co-organization with the Heritage and Culture Department of the Venice City Council and under the patronage of the Ministry for Heritage and Cultural Activity and of the Veneto Regional Government. The Exhibition is being inaugurated at the same time as the 58th Venice Film Festival and closes on 7th October. The three earlier exhibitions showed the work of 65 artists from 41 countries with the purpose of creating an open-air display of the sculptures and installations of famous artists from all over the world in the main streets and squares of the Lido, the Venetian island. This year, OPEN’s special theme shows a certain affinity to the Venice Biennale, the 49th International Exhibition of the Arts which remarkably enough is entitled “The Plateau of Humankind”: frontiers are pushed back and artists of all countries draw closer together. Artists are selected each year by a committee of international critics under the eye of noted art critic Pierre Restany, as President of the event’s Scientific Committee. The intention of OPEN is to show works by international artists, one from each nation. This year those taking part include Mimmo Rotella for Italy, Bernar Venet for France and - through his own Foundation - Keith Haring for America, who departed this world prematurely. The exhibition can be viewed throughout the Lido in impressive locations such as the Hotel the Westin Excelsior or along the shady avenues of the island, making for a spectacular open-air gallery. OPEN has become one of the most keenly awaited events of the Venetian summer. Part of the panorama of great international exhibitions, it has no boundaries. Some artists have donated the works that they exhibited to the Lido of Venice permanent collection, resulting in an original open-air Gallery of sculptures and installations. Some of the works still on display at their sites are by the following artists: Beverly Pepper of the United States (OPEN 1998 “Homage to the Triangle”) who donated her work to the Thetis area at the Arsenale Nuovissimo in Venice; Marianne Heske of Norway (OPEN 1999 “Pierre”); and Valentin Rayevsky (OPEN2000 “Armchair for Classicists”). This year too, for the first time there is the special prize OPEN2001 Mimmo Rotella Foundation; the Foundation’s jury is chaired by the artist Mimmo Rotella himself. The prize is awarded to a young movie director who, while not overlooking the essential functions of narrative subjects, reveals a strong interest in the affinity between Cinema and the Figurative Arts. The close and strong ties that have been forged between Cinema and the Figurative Arts are the reason for this initiative, beginning with the art of the creative genius of maestro Rotella, who has always taken his inspiration from both of these art forms and has been able to create original works that have become, in their own right, part of the history of art.

The prize-giving ceremony takes place on 7th September in the historic and prestigious premises of the Peggy Guggenheim Collection in Venice. The award “OPEN2001 Fondazione Mimmo Rotella” consists of a work by the maestro Mimmo Rotella, a bust depicting the MGM Lion. The exhibition catalogue documents the works.