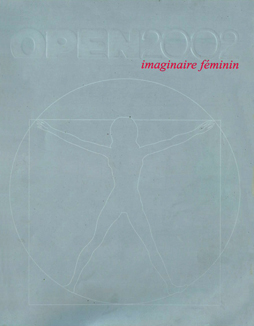 This event has been conceived and organised by Paolo De Grandis, President of Arte Communications, in co-operation with the Municipality of Venice, the Town Council Alderman and Tourism, the Cultural Heritage and Activities Section, with the support of the Patronages of the Ministry of Foreign Affairs and the Ministry for the Cultural Heritage and Activities, of the Veneto Region and of the Province of Venice. The Chairman of the exhibition Scientific Committee is the well-known French critic Pierre Restany. OPEN2OO2 will be inaugurated on the 29th of August, as the 59th International Cinema Festival in Venice Lido. In the four previous editions, OPEN has received the works of over 80 artists, coming from 46 countries, confirming the international success of the event.

“The fifth edition of OPEN, entitled L’Imaginaire Féminin, displays a special version dedicated to the participation of forty countries, represented by female artists, known at an international level: their works will be exhibited alongside the main streets and piazzas of the Venetian island. In a period of global culture, female creativity is the core of information and of artistic communication. In the Land of the West, the position assumed by the femme-artiste mirrors the role and responsibility she fills in the society of her time. On the contrary, in the Land of Islam it often is the peak of a struggle for the freedom of the soul, wherever its intervention lies within a modernity open towards a better quality of life. The feeling of an existential responsibility of the work, goes together with the wish of a larger presence on the world artistic scene. The social aspects connect with aesthetics and politics connects with poetry. Today we witness a real eruption of the global value of female creative talent. The female pioneers have taught their lesson. In a perfect synchrony with the Biennial in Havana, Johannesburg, Istanbul, Sydney or Kwang-Ju, the last two editions of the Biennial in Venice have perfectly illustrated the scope of this phenomenon. It has been decided to dedicate OPEN2OO2 to female imagination in the overall international setting. Each participating nation will be represented by an artist and the list is prestigious: from Marisa Merz to Niki de Saint-Phalle, from Marie-Jo Lafontaine to Mariko Mori, from Yoko Ono to Pipilotti Rist, from Magdalena Abakanowicz to Marina Abramovic.

Albania, Australia, Bolivia, Canada, Indonesia, Israel, Korea, Philippines, South Africa, Tunisia and Turkey will participate in the event for the first time. Four artists Becky Guttin for Mexico, Florence Hoffmann for Luxembourg, Lone Hoyer Hansen for Denmark and Olga Melentiy for Ukraine, who have participated in the four previous editions, have also been invited.Forty nations join OPEN2OO2, two of which reveal their conceptual, rather than geographic nature: Nutopia, by Yoko Ono and Esperanza, the section of the young emerging white hopes, which is represented by Claudia Zuriato. OPEN2OO2 devotes itself to female imagination: what better test to express the vitality of such an event?”.

The second edition of the OPEN2OO2 Mimmo Rotella FoundationAwardfor a young director present at the 59th International Exhibition of the Cinema Festival in Venice Lido has been confirmed: it will be a work performed by the jeweller art publisher Filippini, from Verona. The opening will be held on September 6th 2002 at the prestigious seat of the Peggy Guggenheim Collection in Venice.

Arte Communications publishes the OPEN2OO2 catalogue, which will be distributed during the period of the exhibition. Together with the exhibited works, the catalogue collects texts of artists and curators, of the cultural personalities and the political authorities involved in this project.