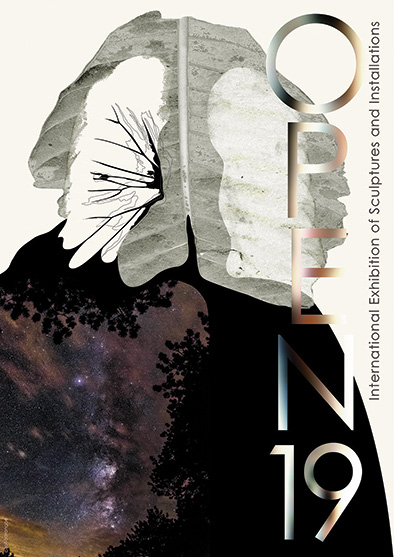 19. International Exhibition of Sculptures and Installations

Press conference in the Sala Plenaria at 6.00 pm

Showing of the Film PRE POST CARDS by Antonio Falduto (UTO) in the Sala Plenaria at 7.00 pm

Inaugural cocktail in the Skyline Rooftop at 8.00 pm (invitation only)

The nineteenth edition of OPEN, International Exhibition of Sculptures and Installations will be held from 2 September to 2 October 2016 at the Hilton Molino Stucky at the same time as the Venice Film Festival. Conceived and curated by Paolo De Grandis, co-curated by Carlotta Scarpa, the exhibition is organised by PDG Arte Communications with the patronage of the Ministry for Cultural Assets and Activities and Tourism and by the Ministry of Foreign Affairs and International Cooperation.

19 years of history of sculptures and installations in the open air in public spaces and unconventional ones that open for the enjoyment of a heterogeneous public, like the recent exhibition area in the Molino Stucky, the most important example of industrial archaeology preserved in Venice: now home to the Hilton and a culture centre. This interaction between the work of art and the public space for lingering or passing through brings beauty into everyday life through the activation of the onlooker’s aesthetic perception with the consequent withdrawal of his usual rational interpretation of reality. Reflection becomes a constant in OPEN, as well as a challenge for the artist to create unprecedented expressive developments through the dialogue between work and space.

The artists taking part in the exhibition combine an extremely free use of the expressive medium to contaminate the spaces of Molino Stucky, from the great sculptures of Liu Po Chun, Stefano Bressani and Giuseppe Verri which can be seen on the Fondamenta della Giudecca to the plastic works of the two Russian artists of the Recycle Group where the leitmotiv of recycled material debunks the new contemporary myths, and then to the installation by Li Chevalier where the particular technique with which the canvas undergoes a sequence of layers of ink is expanded in a serial intervention, to Yahon Chang, the Master from Taiwan who recently made his debut at the MACRO in Rome in the second stage of the long-term project From La Biennale in Venice to MACRO. International Perspectives coordinated by Paolo De Grandis and Claudio Crescentini and whose works will be remodelled for OPEN.

Linguistic experiments in a research into the expressive possibilities of colour as an emotional presence and pure physical value for Lee Tsung-Jen, Verteramo, Carlo Nieddu and Tomas. Heterogeneous works, different paths all sharing a vitalism that goes beyond the limits imposed by the surface, by the colour allowed to flow as though it were a pulsation, to new schemes of composition of tones and spatial backgrounds.

Photography is expressed in a research and an aesthetic that are as different as they are surprising in the works of Miresi and Federico Nero. Setting Venice: the first sets out to capture its views, secret corners, atmospheres, fragrances and architectural details, while the second presents an imperceptible whole through a neat symmetry that transforms industrial archaeological sites into symbolic and conceptual abstractions.

Parallel paths which, though originating in absolute freedom of expression, free from a compulsory theme, contaminate one another. The experience is repeated and amplified when the parallelism involves other zones, other linguistic games. As in the Film PRE/POST CARDS by Antonio Falduto (UTO) which will be presented in a world preview at OPEN and which concentrates on the temporal dichotomy of a world torn between the attempt to enable an ever present past to survive and the fascination of the most deviated aspects of a march in serried ranks towards the future. An analysis in which the director chooses to present questions by means of archetypes and modern myths. The film was shot in four cities: Cape Town, Rome, Rio de Janeiro and New York, involving more than seventy models.

Once again the winning formula of the Workshop in the Art of Calligraphy promoted by the National Taiwan University of Arts will see the participation of an increasing number of children from 4 to 10 years of age on 6, 7, 8 September in the Sala Casanova at the Hilton Molino Stucky at 15.00.

With the strength of this extraordinary formula, OPEN contributes to modifying the fabric of a city, making it an international platform of works in the open air, to show an amazed audience a new, involuntary, amazing way of enjoying art in the light dynamic of a walk outside over-familiar and restricting walls and perimeters, changing its content before their eyes.

The very idea and constant challenge of OPEN is to create a yearly art event in the open air and to gain followers in the world, arriving this year in Korea where Paolo De Grandis has been invited to the Biennale of Sculpture in Changwon, a precious place for its artistic heritage, with a particular wealth of history in sculpture which will be held from 22 September, to take part in an international symposium where he will illustrate his own twenty years of experience at OPEN and coordinate the participation of Michelangelo Pistoletto with The Third Paradise and that of the Colombian artist Jaime Arango Correa.