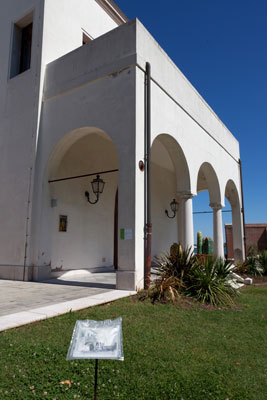 Emanuela Rizzo proposes an interesting recovery of the spaceimage relationship to which she has given the name Souvenir d’espace. Souvenir as a memory of a place, a topos used in the old art of memory, as a means for recalling images which in turn refer back to the fantasmata that enabled first the classical and then the medieval rhetorician to express his concepts, or, more creatively, to nourish the kaleidoscopic effect of the indispensable poetic imagination. As Frances A. Yates admirably stated in her works, mnemnotechnics was an ancient method of learning that suddenly disappeared with the death of Giordano Bruno a which, as in an ideal theatre of memory, allowed the interconnection in terms of wisdom of the most varied fields of knowledge. In her openair project, Emanuela Rizzo has sought inspiration, rather like an alchemist, in these unprecedented contents. More precisely, for the occasion she has conceived a kind of air cushion containing water, within which a sheet of paper has been inserted. Each air bubble is juxtaposed on an iron structure placed within the space reproduced by the same drawing. The work experiences the same process of transformation as its natural surroundings. Inside each air bubble there is a specific microclimate. The sheet of paper wet with water modifies the shape, the water evaporates, while the polyethylene deteriorates. The drawing reproduces the real image of the space in which it is located, as though it were a postcard, a photographic reproduction usually used to keep alive the memory of a place or a town. So there is a close relationship between the real image and the one in the drawing, as between the real space and the envelope that partly contains it. The image is enclosed in the space of an envelope, where the outside becomes the inside and vice versa. Hence the possibility of infinite relations that could be revealed in a similar process that is neither worn nor deteriorated.