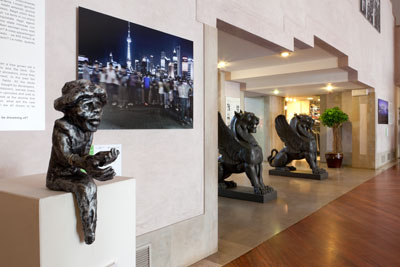 In her latest 3-D animation video The Greatness, multimedia artist Zhou Yi takes the viewer to hell and back. Using visual references from her previous works inspired by Dante’s The Divine Comedy and featuring samples of unpublished tracks and melodies from the archives of Italian composer Ennio Morricone, the atmospheric new work is both beautiful and haunting.
“I wanted to reproduce a dream or a nightmare sequence. The soundtrack also helps to enhance the message I want to deliver… the kind of feeling, which is going to hell and then back, so that was the idea” the 31-year-old artist says.
The Greatness is part of Zhou’s ongoing investigation into the themes of death and the afterlife, topics that are considered taboo among the Chinese. She believes that only by confronting the unknown can the fear of the inevitable be overcome.
Zhou began creating a series of video installations and sculptures five years ago, based on her interpretations of paradise, purgatory and inferno. What drew the artist to Dante’s masterpiece – written in the early 14th century about a man’s journey from hell to paradise – is not only the poetic writing by the universality of its themes.
Zhou says she is fascinated by “the idea of death, the idea of fear and the idea of how we imagine our lives after death” because they are fertile ground for her imagination.
French philosopher Jacques Derrida’s Apories, a book she had reread in the past year, fuelled her interest, especially the fear of death: “It describes the idea of death and… when we think about that motion, the idea of why we are scared of that.
It seems to be an obstacle japory stems from the Greek word aporia, which means difficult because it is something that we’ve never faced so we don’t know what it is and the fact that it is an unknown factor… increases the fear because nobody can ever describe to use how it is.
So when I read the book, it helped me to… have less fear about that idea, which is more of a human construction of that idea of death. If you look at it in a different way, to look at it in a different way, to look at it as a boundary between two spheres, [death is when] you walk pass this boundary.”