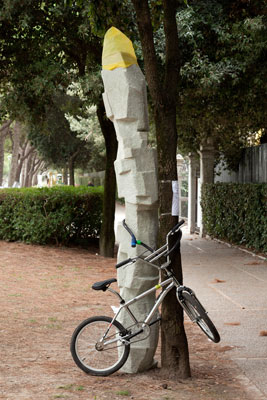 Modernism, that discriminating appropriation of the conditions of alteration heralded by the prolonged period of the modern, has established itself mostly via its architecture rather than its revolutions. In a Gothic chapel in the castle La Sarraz, a few miles north of Lake Geneva in Switzerland, under the auspices, and indeed after a direct commission from Mme Helene de Mandot, Sigfried Gideon and Charles-Édouard Jeanneret-Gris, aka Le Corbusier, appended to by two dozen others, canonised a manifesto and an association that still dominates our understanding of modernity. True nonetheless to the modality of revolutions, this first manifesto of CIAM emphatically stated as an aim the affirmation of “a unity of viewpoint on the fundamental conceptions”, of its discipline, namely architecture. As with any purging orthodoxy, the proclaimed modernism of CIAM defined the divides with its past but also within itself, thus activating the rifts from where an other tradition was to mobilise the same historical and material conditions for. Against the systematic standardisation of the building as object, later defended as The International Style, a view of the build environment as “a framework for the actions of men, a race of enactment and celebration, a theatre that makes action possible”1 was diffused giving rise to numerous local modernisms. Against mimesis, methexis.
This transformative opening up of architecture as a critical, reflective act, in the context of its particular relations of production, rather than a regimented technological outcome, formed much of the local idiom of architectural modernism of Cyprus. The utilisation of vernacular methods and materials like the porous, dark-yellow limestone by Polys Michaelides either as load bearing material in his Bauhaus influenced designs for the Nicosia Orphanage building (1934) and the now demolished General Hospital (1939) or later as facade cladding, the use of sea pebbles by Charilaos Dikaios and Neoptolemos Michaelides in their mid-1940's concrete structures, and the later's attempts to incorporate adobe bricks in high-rises, are but a few examples of early re-arrangements of materials and techniques within the modernist tradition, rather than its mere stylistic adaptation. Such arrangements apart from setting up an active but critical relationship with the ideals of modernism, became, as any arrangement, a means of circulation, of transmission of these new conditions for architecture, uninterrupted by the complexities of technological or other fidelity.
As a consequence newly imported materials and designs such as concrete, corrugated iron, aluminium and facilities for domestic sanitation were and still are thoroughly and unapologetically utilised en masse, beyond the formalised design. The city, the buildings, architectural modernism, is thus to be found redistributed not as remodelings of macro strategies but in “in a continual process of discontinuous transformation”.2
These discontinuous redistributions of knowledge and information, at the core of the project of modernity, have often been lost between glorified pageants of the favela-chic, the idealised accounts of ingenuity in a recent revengeful return of place and the resistant obedience of the specialist terming them as surplus, useless to its hagiographic historiography. This intricate transformation of urban and architectural experience however reveal the incomplete process of modernity by negotiating its formal limits allowing for a critical spatial practise to emerge. Critical spatial culture denotes a transformative rather than descriptive engagement with the varieties of disciplines and issues operating diagonally across 3 the conventional occupations and enactments of space.4 Latent in critical spatial culture has always been a resilient transgression, the indisciplined 5 affairs of art in and out of its outgrown boundaries.
Phanos Kyriacou, an artist employing simultaneously the sensibilities and practises of an ikebana arrange and of a punk film-maker, is one of the main Cypriot perpetrators of this transgressive relationships of art. Phanos Kyriacou's practise is retrieved from the outskirts of craftmanship, obsessive research and civic engagement. With his idiosyncratic, Daedalic humour he is acutely aware of the intricacies of materials embedded in locations and structure. It is this attentiveness that persists in his varied output and which configures his re-arrangements of the factual, the historical. From objects to posters and from paintings to landscapes Kyriacou interstices our perception of space, problematising the notion of location, often via the already problematic local. His investigation into the forgotten, lost mountainous regions of the island (Wonder Chambers, 2007) have dispersed into his fragmented almost illegible portraits of shamans and visionaries, devoid of their iconographical status and devotional characteristics of The Visionaries series. His photographic and performative explorations of scenery and topography (A majestic escape from a parasitic society, 2006-2007) become odd, unreal landscapes, of tall and thin sculptures beyond the primacy of the real, escapees from geographical signification. His oscillations to and for the backstage of history, as is his recurring preoccupation with Bruno Taut (see for example the intricate Problem Solved, 2010 or Bruno Taut's mountain cave, 2009) or print works under the Midget Factory nom de plume, expose the cracks of monumentality and remembrance, underlined in the My heroes series of works and most evident, not least through their boulder-like materiality, in Phanos Kyriacou's most recent sculptures, including They had to climb a minor hill in order to enjoy a full view of their problem, 2010.
Phanos Kyriacou's work inflates space, expanding our grasp of its particulars over and above the demolishing silences of history and its monolithic orthodoxies. From the ridgelines of an uninhibited art and an indisciplined architecture he rigorously transcribes, re-arranges, the anexact 6 privateerings that continuously open up the in-finite conditions of possibility of the emergent in all its discontinuous disparities with the illustrations of programmatic predictabilities.

1 Colin St John Wilson, 2007, p. 86
2 Howard Caygill, 1998, p. 121
3 On the interdisciplinary and the diagonal see Julia Kristeva, 'Institutional interdisciplinarity in theory and practice: an interview' IN Alex Coles and Alexia Defert (Eds), 1998, The Anxiety of Interdisciplinarity, De-, Dis-, Ex-, Vol. 2, Black Dog Publishing, London
4 See Rendell, 2006, pp. 3-12
5 More on the indisciplined in the indisciplinary see W.J.T. Mitchell 'Interdisciplinarity and Visual Culture' IN Art Bulletin, 77/4 December 1995
6 “Husserl speaks of a protogeometry that addresses vague, in other words, vagabond or nomadic. Morphological essences. These essences are distinct from sensible things, as well as from ideal, royal or imperial essence. Protogeometry, the science dealing with them, is itself vague, in the etymological sense of 'vagabond': it is neither inexact like sensible things nor exact like ideal essences but anexact yet rigorous ('essentially and not accidentally inexact'). The circle is an organic, ideal, fixed essence, but roundness a vague and fluent essence, distinct from both the circle and things that are round (a vase, a wheel, the sun). A theorimatic figure is a fixed essence but its transformations, distortions, ablations, and augmentations, all of its variations, form problematic figures that are vague yet rigorous, 'lens-shaped', 'umbeliform', or 'indented'. It could be said that vague essences extract from things a determination that is more than thinghood, which is that of corporeality and which perhaps even implies an esprit de corps.” Deleuze and Guattari, A Thousand Plateaus, Athlone Press, 1999, p. 367
For an extended discussion on anexact geometry and its implications with materiality in the spatial field see Reiser and Unemoto, Atlas of Novel Tectonics, Princeton Architectural Press, 2006, pp. 144-149.