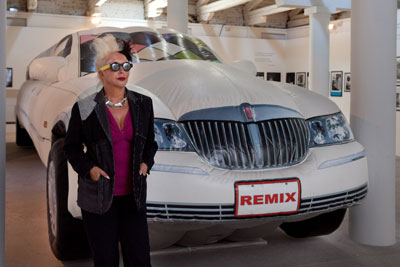 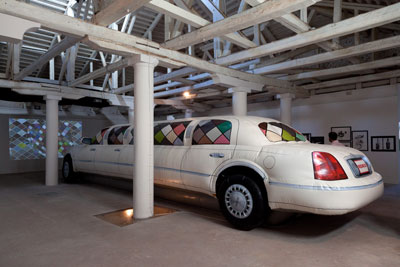 “A work emblematic of the artistic approach taken by ORLAN, this monumental installation not only underlines the tyranny of social conventions, but also replaces them with a place of freedom where other ideals become possible.
The installation consists of an oversized inflatable limousine which – as in a drive-in – faces a screen showing a film (Orlan Remix: Romain Gary, Costa-Gavras, Deleuze and Guattari) where ORLAN has mixed some scenes from Clair de femme – the film by Costa-Gavras based on a novel by Romain Gary – with her own skin cells, and other human and animal cells.”1
ORLAN has chosen the scenes in Clair de femme where Montand and Benini tell jokes about the Japanese and the Belgians, and scenes showing the training of multicoloured poodles, including a pink one, that dances with a chimpanzee.
“A symbol of the social constraints attached to marriage (the concern with luxury and appearances), the inflatable limousine proves to be a sham. Far from this standardisation, ORLAN points out the absurdity of racism and puts into perspective the obvious fact of diversity, even of hybridisation.”2 Nevertheless these cells are based on an absurd system; anyone can buy them on the Internet where they are classified according to race.
“The leitmotif of the Harlequin costume present in the video projected on the screen and on the windows of the limousine (transformed into stained-glass windows for the occasion) acts as a metaphor, substituting a patchwork of combinations and evolutions for an overly smooth and ordered vision of the world. To the sound of the paso doble and in a village dance atmosphere, ORLAN makes her skin cells, filmed in close-up, dance with those of other human beings and other animal species. Once again, she uses her body to reject taboos and champion an evolving reality.”3