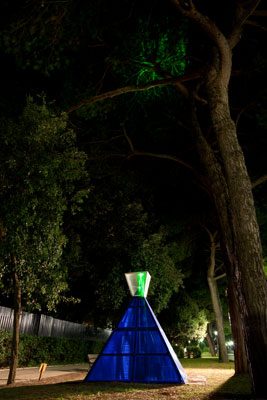 "The analogy of contraries is the connection of light and shade, of height and hollow, of plenum and void."

I first wrote down the work’s title – itself part of the work: Exelixis – the Greek word for Evolution. I broke it down into syllables: EX – EL – IX – I – S.
The word’s power to make use of symbols-references, such as letters (X, ex – L, el), in order to convey the concept of size, of the monumental, and ultimately of the earthy intellect’s need to touch upon greatness, to construct the utopia of Babel, gave me pleasure; I was equally pleased by the serpentine-like dynamics of the word’s ending, bearing the harmoniously endless S.
After this revealing game with the title’s writing, I started observing the work’s drawings, on which the artist had made handwritten notes of the technical details. My thoughts on the work’s elements wandered around the concepts of symmetry and transparency; around the connotations generated by the blue color; around the accumulation and emission of energy… Once again, my mind finally stumbled on the mental engraving of letters (X – L – S), foundational symbols whose combinations result to endless variations, references to statements for all past creations and for all possibilities of creation in the future.
It’s all geometry, I thought; it seemed like a certain geometry of order and rhythm, of harmonious analogies that lead to the creation of a hermetic museum; a museum, which even though hermetic could be exhibited in plain view, offering and provoking conceptual stimulations and individual points of view.
Alexandra Marati’s pyramid was constructed according to careful and accurate calculations of hidden substructures.
It incorporates a clearly visual definition of space and it functions as an armature arranged based on life rhythms, on the analogy of nature and on the analogy of oppositions.
A geometric, comprehensive universe of mathematic elegance that among others signals a point of entry into the infinite; in other words, engages with the unseen encounter with the omnipresent fourth dimension.
A concise geometric manifesto of both human arrogance and humility.
Also, a kind of visual proposition that with decisive austerity seeks to opt for and to highlight an aesthetics of tolerance.
To conclude, here is a kind of epigram: X – L… S: 1. making the most out of the minimum can deliver the maximum; 2. when something is somewhere obscured, it can become evident elsewhere. Let this be seen as an aftermath and as a supplementary, aphoristic comment on the essence of the work’s title, on the concept of the word Exelixis / Evolution.

A pyramid-shaped shell, 250cm high, standing on a square, 250x250cm, base, made of semi-transparent, cobalt colored, polycarbonate material.
One of the pyramid’s sides bears a triangle, isosceles opening which allows the audience to look directly into the pyramid’s interior.
There, hanging from the apex, a vibrating, rotating, amphi-convex lenticular disc made of aluminum, the diameter of which is 100cm, while the maximum distance of its convex surfaces is 50cm long.
On the pyramid’s exterior apex, an inverted conic hopper is attached. Made of polycarbonate material, the hopper emits a laser beam. It is 150cm high, and its base diameter is 100cm long.
At the opening’s entrance, a low bench which takes the shape of a sand-glass, made of non-transparent, cobalt colored, polycarbonate material, is connected to a bioenergy mechanism, located in the construction interior.
The light coming out of the pyramid becomes especially visible during the night.