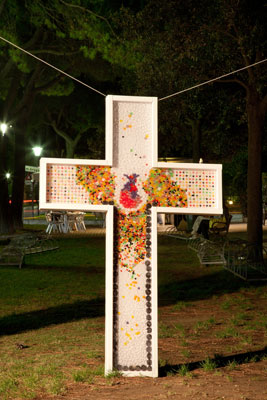 The artist Alice Olimpia Attanasio was born in Milan, in 1985. There she attended the European Institute of Design, taking her diploma in 2008. Right from the start she chose painting as the most important expression of her artistic activity. However, as time passed, she also began presenting installations, which became more and more fundamental for her. In 2009, Alice Olimpia Attanasio was invited to the Galleria d’Arte Blanchaert in Milan for a personal exhibition entitled Les jeux, les caprices. Her professional turning point came very quickly. The artist won the prestigious Arte Laguna Prize - Under 25 Section for the season 2009/2010, for her painting exhibition. This success gave her the attention she deserved. Recently, Alice Olimpia Attanasio held another personal exhibition in the Galleria d’Arte San Lorenzo in Milan. Both installations and paintings were presented in a project entitled Medication, which will be continued at this event in Venice. From an aesthetic point of view it must be said that the artist tends to prefer interaction, both through conceptual abstraction and by directly involving the spectator. The philosopher Derrida reminds us that for the ancient Greeks, taking a medicine means upsetting the body. Consequently, to enable our organism to be well, we nevertheless have to hurt it first. The creativeness of Alice Olimpia Attanasio therefore focuses on the aesthetic of medication. Oil painting on canvas and installations present scenes of a more sweetened therapy. Often people who are examined in the outpatients’ departments or are admitted to hospital are afraid of the doctors’ instruments. Alice Olimpia Attanasio shows that an intravenous drip can be set up with globules that are not so much sucking (blood) as suckable (sweets), while in her imagination the nurses and doctors have the appearance of an animal or an innocent child, with bottles for dissolving sugar pills and scissors for cutting cords made of pure liquorice. Sometimes it is the medication that plays just for the sake of playing, but without any aestheticism of manner! But the medicine is useful and we take it for a very precise reason, under conditions or terms that rarely change. Despite this, Alice Olimpia Attanasio ensures that we look after ourselves aesthetically by means of a placebo. Consequently her art medicine is to be taken for its own sake. Essentially, the placebo is at the most a game.
Gadamer thought that also art in the broad sense was produced just for its own sake, just like playing.
In the exhibition in Venice, Alice Olimpia Attanasio shows a caramel cross. It is two metres tall, with a surface of transparent resin. Inside it we can immediately see the sweets of the aesthetic placebo, which form a coloured mosaic, with an anatomical heart in the centre to remind us of the relationship between cure and psyche. More crosses with sweetened symbolism also appeared in the Medication exhibition in Milan, though they were smaller in size. In Christianity, the Cross is both a visually painful sign and a symbolically restful one (in the hope of resurrection). The artist declares she is an agnostic; in fact, this work has nothing to do with religion, it is only the symbol of a healing faith. Anyway, we know that Faith is professed only for its own sake. In this sense, even the Cross of Christianity could be perceived exactly as a work of art.