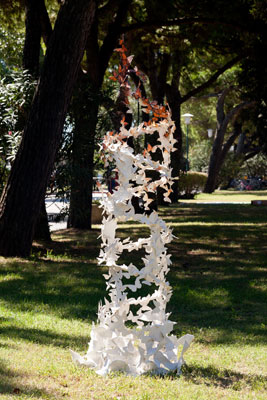 The metaphor of lightness is recurrent in Annalù’s sculpture. The white feathers that group together to form a swing hanging from a blue sky, the paper box that seems to be cut out of a child's drawing suspended among the branches of a tree, a castle of paper envelopes balanced on a tightrope, two stacked chairs flying, because one of the two is the white ghost of the other made of paper envelopes, are only some of the creations with which the artist gives shape to the ideas of weightlessness, of levitation in empty space. This metaphor of lightness provokes sculpture, denying one of its most characteristic, most traditional aspects, namely the bulky immobile mass, the gravity of material.
In recent years a new motif has appeared in Annalù’s work. In Altius and Fortius, two works of 2007, a whirlwind of laurel leaves is raised up and frozen in sculptural form: the regular design, with its abstract whirling leaves, is fixed in a double spiral motif, regular and abstract, which seems to challenge the passing of time with its immobility. A common natural phenomenon, made of nothing but leaves and air, results in a tangible monumental object which, when we observe its structure, reveals that it really does not have a well defined body, it has no other stable structure but the delicate, fleeting rubbing of one leaf against the other.
Twister, a new monument to lightness, uses butterflies instead of leaves, another subject from the world of nature that associates flight with lightness, on which Annalù gladly lingers. In Twister the swarm of butterflies, caught in a blast of wind, is frozen in an immobile spiral, sculpting in the air the imposing structure (about three metres tall) of a mysterious motionless flight: the dialogue between the static and the moving, between lightness and weight, truth and fable, is given a new expression.
The butterflies are light but, unlike the leaves, they are alive, not inert. Their swarm decomposes the regular patterns of the wind, trying to impose the patterns of a dance with a structure that is broken up and recomposed moment by moment, struggling with the gust of air.