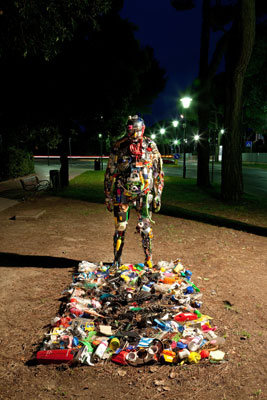 In Things by Crash Toys (Koji Yoshida and Dario Tironi), objects, pieces of material and rubbish have occupied so much of man’s life that they have stolen his structure and assumed his likeness. A man and a woman sit by a cradle, but the sweetness and protection expressed by the family group are threatened by a noticeable sense of instability and precariousness communicated by their bodies, pure agglomerations of things. Pieces in precarious equilibrium, even though they are perfectly positioned one next to the other. In a kind of visual antithesis, Crash Toys express considerations about man and nature, which seems to be enclosed in a state of evolution-involution. These sculptures are assembled portraits of individuals with details of the faces, just as in the works of Arcimboldo, where the objects metaphorically connected to the subject, because he makes use of them in his life, de-sublimate the portrait. The volumes of waste material enable us to read the anatomic structure of the bodies, but at the same time they seem to invalidate deeper structures of the human being, suggesting an obligatory passage to the artificial world in which the residue of the objects originated. Environmental pollution expands its boundaries, goes beyond its physical limits and, like a virus, attacks our synapses, our mental systems. Values too, transmitted by the family and by experience, are affected by pollution and seem to be more and more precarious, in a constant search for the right piece to make up what we are each day.