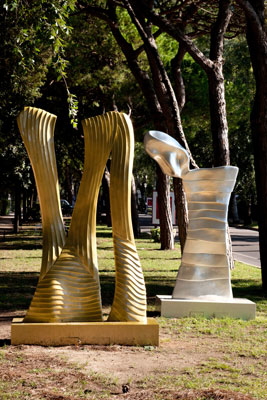 It took him half of his life to tell and spread the idea of fashion. Than he realized that spreading it, making it accessible to everyone it was loosing its fashionable taste and that aura which made women divine. He chose silence. In 1990 he sheltered in his studio to shape it in chalk, to stamp it in the lucid resin in order to give to fashion its idealistic dimension again. Transforming not dresses but ideas of dresses into sculpture he gifts us a new fascinating vision to fashion. Of that complex idea which fashion expresses: “Not only the esthetical side, but even the reflexes of time, the changes of society, the evolution, the experimentations, the contests”.
Nowadays he has distanced from those who consider him as a master and he works alone. He does not look for the glory of events. He hardly ever shows his works: he does not shape them for notoriety, he has, nor for the consent which characterized all what he did in his life but to give a shape to his noble idea of fashion. In those crystallized folds, given to the eternity of the work of art, in those dimensions exalted by the smoothed surfaces, there is all the story of the sublime of fashion. Of that irresistible suggestion, of the faint and receding contour lines, which he is always able to exercise on each category of people. His story is solemn: the sculptures, white or golden, very small or gigantic, the white casts made of chalk or made of resin, indelible tracks of folds, seams and brown coats have the magniloquence of the classic works. As the gods of Partenone they are saved from the accidents of time. His sculptured fashion, freed from the prison of the ephemeral culture, which makes it episodic and faint, becomes without loosing plasticity a new conceptual dimension revealing itself as complete interpreter of the human being.