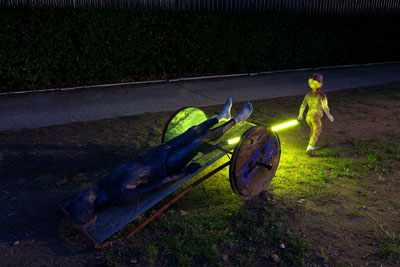 The world is full of carts, with broken axles nailed to the ashes of the floor. Just like the crystallized fossils, in the cinematographic mechanism, which does not foresee any continuity with a conclusion. Winged carts, Apolline, drawn by white swans. Which most of the time however carry white bent men, wrapped in faded rags. Or some laden with light fabric for the making of soft fine clothes to lie in.
H491 is the first sculptural work realized together by Barbara Taboni e Giacomo Roccon. Here is a new cart, a war cart, and crystals like knives.
Mathew, 18:22 - After numerous forgiveness, seventy times seven, the measurement of man in history, of this man in this story, is at it’s peak, Therefore time to refocus on the small crystal. And perhaps Christ was a Crystal?
H491 does not present an indigo child, intent on plunging itself into the flow of the human being with its load of historical furnishings. Rather it deals with a radiant open craft, a new war-like critical device. Piloted by, apart from the last patience, by a crystal child, hydrogenous raw materials transformed into hydrogenous ends.
The iridescent child, facetted tungsten prism, translucent daimon body, breaks the space, widening it and radiating a spectrum of iridescent, underwater colours. They push the stone cart along, on which a man is lying with his head pushed backwards. Burnt, his face a carbon mask. The grey heavy felt uniform in perfect order.
The clothes and posture are those of the perfect ashen Official.
The child, again is a motor, a star, a positive tool, a reactor, producer of high energy.
After the nuclear fusion, the compound is thrown into the mould – the form of the device for critical interaction. It crystallizes, the resinous lava runs, and becomes part of the cart. It fills the wheels. The small craft is in agreement with the blades of light, gently sharpened ablators of decomposition have led to the climax of the chemical-gold renewal.