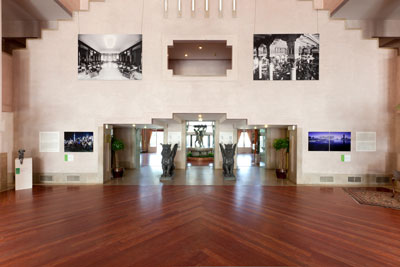 Men looking out onto a new era, at the window of the future which advances, wiping out a cumbersome past. Individuals who become spectators before modern society, which proceeds in great haste. Human beings numbed by the stories told by unpublished actors about a China that is starting again from Year Zero, beginning from megalithic architectural works, contemporary pyramids under which the old world is silently dying. Speed is sweeping away thousands of people who live on a continent where there is no more room for leisurely bicycle rides, but only highways created for fast cars and men who have no more time for themselves. So farm labours put on strange workers’ overalls, emigrating to seek their fortune in the virgin cities that the whole world looks on with fear, with the same sense of bewilderment that afflicts a people whose identity has been wrenched away, wiped out by heavy structures of glass, iron and cement, now the only futuristic forms in which the Chinese can and want to recognize themselves with pride. The world has stopped here, and will start again from zero.