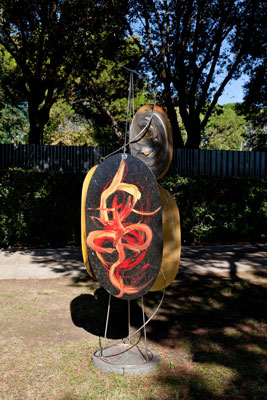 Margherita Mauro sees sculpture as a passion, a stimulus, an urge to translate emotions. She didn’t go to art school or have any teachers. Her painting springs from an inborn talent, from an inner need that she cannot escape and that goes step by step with the art of music.
Right from her earliest works in charcoal and coloured chalks, she has shown a predisposition for a decisive stroke that generates the incisive outlines of forms, enveloping her works in a metaphysical immobility. Her research is also based on painting material which is not only a means of expression but is itself a sensitive substance that captures duration and extension. Her works are manipulated at different stages with delicate or harsh gestures to soak the support in colours, now soft, now intense, so as to communicate the alternate rhythm of hope and anxiety of our times. Emotions are supplied by the chromatic effect, made of colours consumed by secondary interventions and definite outlines, but with such a softness that they strikingly alter the figure in the dream dimension.
It is this sincerity of expression, this prevalence of music without notes and words without text as opposed to the prose-like and immodest use of the voice, that gives even more value to the artist’s work. She sketches figures that emerge as primeval traces from the surface, to suggest and not reveal. Her informal use of gesture accompanies freely inspired accents in which the hybrid aspect of organic matter becomes real and human at the same time, living and speaking matter. Sometimes she contorts the form into extreme metamorphoses, charging the surface to which she gives the right atmosphere each time by resorting to a mobility of different rhythms, timbres and colours, so that the shapes vary from curvilinear impetuosity to harshly cut hollows, sometimes more graphic than pictorial.
Spatial research and melodic chromatic intonation are the outstanding elements of this painting, suspended between dream and a reality made of a transformation that becomes modern poetry, the charm of a look at nature, at the world that surrounds us to give us magic emotions. This extreme fluidity of forms and colours determines, by osmosis, a chromatic and spatial mobility, so that not only does the colour appear to change, but the image varies constantly too, with semantic friction.
The installation that the artist presents at OPEN offers a new realisation and different modulation of the fundamental characteristics of her painting. Here each aspect - form, matter and colour - is the echo of an ancient, arcane symbolism, shared and stored away, which creates new original metaphors and syntheses in a game of balances and references: from the historical, philosophical and mathematical implications of the circle, the pyramid and the spiral to the symbolism of gold, blue, black and brown, to the dialectic encounter of stone and steel. Solidified and stratified meanings generate new ones when they meet, in confrontation and interaction, leading to original new interpretations that the artist calls a journey. A journey in the double significance of space and time, a path to be followed, a dynamic relationship with others, comparison and research, a continuous creation of inexhaustible meanings.