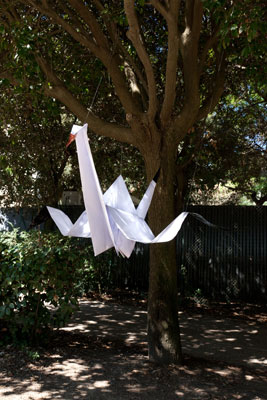 On the wings of the oritsuru

According to an old Japanese legend, anyone who can fold at least one thousand paper cranes, using the origami technique, will have all his dearest wishes and prayers come true.
When visiting the Shinto temples scattered all over Japan, it is not uncommon to see garlands of coloured cranes, skilfully made out of sheets of paper, shaken by the wind at the gates of the temple, making a sound like a whispered prayer.
The crane is traditionally associated with the concept of long life and dedication, it is substantially an apotropaic figure, of fundamental importance in the Shinto world.
One of the most touching episodes of post-war Japanese history is also linked to the myth of the thousand cranes: it is the story of Sadako Sasami, a girl who was two years old in 1945 and lived in Hiroshima, just about a kilometre from the spot where the bomb fell, and she was miraculously unharmed. She grew up, but the bomb had not stopped killing: in February 1955, at the age of twelve, Sadako fell ill with leukaemia caused by the effects of the radiations.
Sadako spent the long days in hospital making little origami cranes. She died on the morning of 25 October 1955. Since that day thousands and thousands of paper cranes, of all sizes and all colours, have been made continuously by all the children and inhabitants of Hiroshima and turned into garlands, patterns and compositions of all kinds that are used instead of flowers to decorate memorial sites: countless numbers of little cranes are also sent to the city of Hiroshima from all over the world.
That’s why the origami motif of the crane has been chosen as a symbol of peace and brotherhood for all peoples in the world.
All these suggestions are summed up in the large installation entitled Big Oritsuru - the Japanese name for the crane - by the young artist Michela Pedron.
In her vision, not one thousand cranes but a crane one thousand times bigger, bearing on its beak an indelible sign, the blood of the artist, and which assumes a profoundly sacred meaning, confirming its role as a bridge between east and west.
The work before us presents clear aspects of cultural hybridisation, the reference to the Shinto myth of the crane blends with the idea, present in Christian doctrine but taken from an anthropological tradition common not only to the Mediterranean cultures but to the whole human race, according to which blood is the most effective sacrificial offering.
The action of cultural mediation is achieved by metaphorically renouncing the gory aspect associated with the allegorical meanings of blood, and combining it, not only physically, with the figure of the crane, a symbol of life and hope, which falls within the Tao concept of harmony. But the crane, bearing on its beak the tangible and physical sign of the artist’s presence - her offering - also becomes an intermediary for reaching the divinity and, at the same time, implies a message of change.