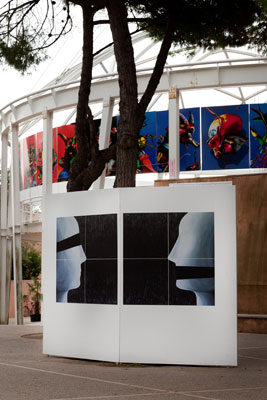 Pinarello, with the symbolic use of the stylized profile of the human face inserted in scenes between informal and metaphysician, moves himself through the way of conceptual investigation. "In base to his own state of mind and intuition, Ottavio Pinarello instinctively feels what situations will be represented in completely pictorial way or through a mixing of painting and photo. In this second case the photographic image that will compose the work is realized by the artist to answer to one particular vision and feeling, the shot is intended therefore from Pinarello as representation of what we can’t see, but we can only feel" (G. Le Noci, in Arte Contemporanea, Nov-Dec 2009). The wish to reveal and to objectify the inner reality and the soul’s feelings, between conflicts and contradictions, is also strong in his exclusively pictorial works: for OPEN 13 the exhibited work is the 2006 diptych Blindfolded Profile - Gagged Profile, from the cycle blindfolded and gagged that analyzes the problem of communication among two entities or among different faces of a same entity; this work was shown more times in Italy and abroad. But now this diptych is particularly meaningful because the image of the Gagged Profile has recently been used in Italy, without the authorization of the author, as symbol of the protests No Gag against the Decree of the Italian Government about the telephone interceptions, in consequence of this the unduly exploited image of the art work has been communicated for weeks on all the national most important means of information. Paradoxically the gag has been put to the author of the Gagged Profile, sometimes the art is prophetic. But if others have wanted to violate and to exploit this work, conceptually the artist now takes back of it possession, turning the diptych into installation, through an operation of enlargement, fragmentation and recomposition.