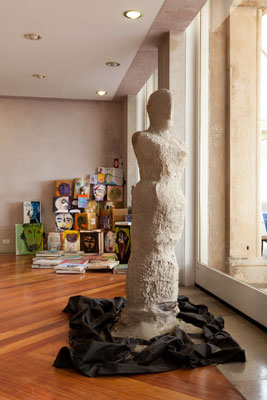 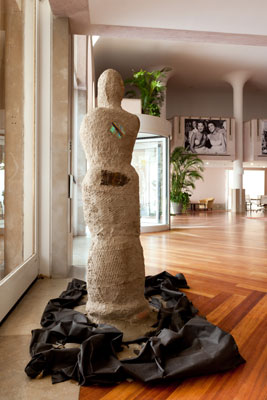 Erosion is the disintegration of matter in nature over a determined space of time. My erosions are artificial, which itself is an antithetic contradiction with respect to erosion in nature, were it not for the fact that my erosions are excavations that, in a natural way, are guided by the subconscious (Unterbewusstsein). It is an excavation within the self, a seeking, an eroding of the subconscious. This kind of excavation has to do with the Eros. It is an excavation of the flesh, a sublimated Poiesis, borrowed from Dadaism, avoiding Bacon, but with an absolutely unforeseeable result. Digging to discover, to uncover things that were not visible before, just like erosion. The sculptures are inside the stone or in a material similar to stone, they are hidden inside, waiting to be uncovered, exposed. It is a process of internalisation, digging and discovering a life in the depths of the ego, or, as I call it, psychological archaeology. They are like finds from days gone by, they have something eternal or immortal about them, an aura like the sculptures of Easter Island and, at the same time, something that Freud might have called uncanny (das Unheimliche). This element of Unheimlichkeit is important. The word Unheimlich contains the root Heim, meaning home. The negation Un- determines the upsetting of comfort, in the terms of this indigenous sensation. So according to Freud, to be unheimlich we must first create a relationship of Heimeligkeit, that is take an element that relates to our everyday life, to the things that we love, that we see around us, that belong to our habitat, such as, for me, the Earth Pyramids of Renon near my home, and transform it into something unusual, unseen, mysterious, something that does not physically belong to us, but belongs to our subconscious. Here we see pieces of rock that assume human likenesses, including the bones that indicate life or at least something organic. This relationship between the mineral and the fossil, between stone and decay, between being and not being, is interesting, this is the dialectic relationship between the organic and the material that pervades the sculptures. They are stone giants, enormous cocoons (Kokon) with human features that I bring to light. Clues identify these enormous cocoons and tell something about their past and their present. They are like mummies that have been shut up for thousands of years, about which a great many things may be supposed, but we are never able to learn everything about them. These stone creatures are archaic, mystical, mythological, but it is not clear at all whether they want to be really prehistoric or to belong to our time.