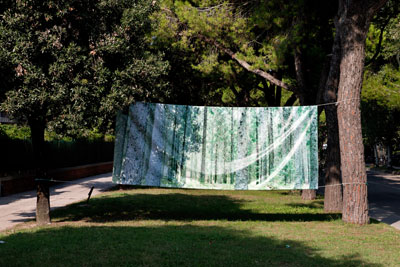 In nearly all cultures the forest has a profound symbolic meaning, it represents the physical and mental space in which to undertake a journey towards an unknown world. In the complexity of anthropological traditions, it is not uncommon to identify the forest as the chosen place for performing rituals of initiation or of the passage from childhood to adulthood.
Even in the western world there is, at various levels and with different interpretations, a constant use of the archetype of the forest. We need only think of Dante’s forest savage, rough, and stern, or of the woods, always present as a physical and psychological element in myths and fairytales, understood as a mysterious place, where nature takes the upper hand over human reasoning, but also as an implicit moment of growth and evolution.
All these considerations are a necessary introduction in order to understand the installation Taiga - a huge advertising banner hanging among the trees of Venice Lido - by the artist of Russian origin, Olga Schigal.
The taiga is a familiar landscape for Schigal, who spent the first years of her life in Siberia, but at the same time it is also a place of memory. Olga pays tribute to that physical and mental dimension represented by the Siberian woods where she grew up, that accompanied her from childhood to late adolescence, when she left her homeland and moved to Germany.
The biographical aspect is preponderant, as if it were necessary to retrace her steps through the wood that took her away from home, although the artist herself admits that she is imbued with such a mixture of cultures that it is difficult for her to identify any place where she has lived as home.
The installation is also to be understood as a portable piece of nature, which blends with the real landscape to create an imaginary trompe l’oeil effect, where the sometimes very slight limit between reality and fiction, between art and life, between present and past, is lost. To all this is added the idea of being able to act on the urban landscape, with a vaguely situationist flavour, modelling it to suit one’s own personal grammar, with the ultimate ambition of bringing the spectator into the mental space of the artist and asking oneself about a real and symbolic nature that is gradually disappearing, taking on the role of a consumer product, to be advertised in the middle of the street.