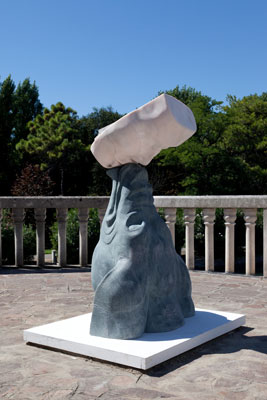 The inclusion of Heavy Dog Kiss in the 13th edition of OPEN marks Dennis Oppenheim’s return to Venice after his much acclaimed participation in the 47th Venice Biennale in 1997. During the more than forty years of his successful career, the North American conceptual artist has never ceased reinventing himself. A precursor in land and body art, video and performance art in the late 1960s, he began to devise large scale installations and sculptures in the 1970s and 1980s. For the last two decades he has focused on public art, with his latest project, Radiant Fountains, three two meter high water splash shaped metal structures with LED light animations, being currently under installation in Houston, Texas. Heavy Dog Kiss was initially cast in pigmented fiberglass in 1993 and is included in prestigious collections, such as the permanent collection of the Whitney Museum of American Art in New York City, while the present piece is carved in marble and will become part of the collection of the Museo del Parco di Portofino. The sculpture features the head of a dog, vertical, tending his snout towards the face of his master who reciprocates the gesture, resulting in a continuous kiss.
The anthropomorphism of the dog and the mask-like appearance of its master are characteristic of Oppenheim’s creative process which deconstructs and transforms familiar objects, beings and scenes to challenge our perception and concept of reality. Does the dog hang on its master's lips, or is the master resting upon the dog’s affection? Or are both mere representations, emanations of the other’s mind?
Eventually both dog and master may simply be creatures conjured up at will by the artist who continues to inhabit the scene and its possibilities through the inclusion of unworked materials reposing in the cavity of the human mask and which may soon embrace new shapes. According to Oppenheim, the superficial layering of form and content, without a rich and inspired internal drive, is bound to have disappointing results. Instead, it is important to pressure oneself to dig towards each work, to try and penetrate something. Art should be what we don't know.
Visitors adamant to further explore Oppenheim’s wittily surreal universe currently have the opportunity to see an exhibition curated by Alberto Fiz at Galleria Fumagalli in Bergamo which includes the installation Theme for a Major Hit (1974), a group of puppets, true miniature alter egos, dancing to the tune “It ain’t what you do, but what makes you do it” and embodying the artist’s essential existential dilemma.