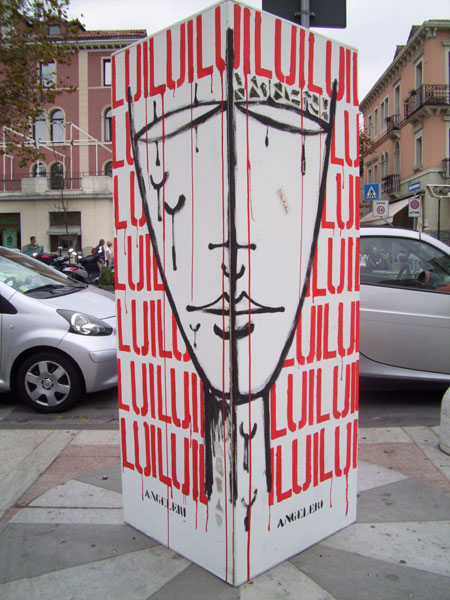 For Angeleri, his art is the Love of women… Women fill his paintings, his songs and his existence… And the words of his songs also appear in his paintings, which in this way come alive and are able to transmit more complete emotions that can invade the memory of the observer.

His works are a continuous dialogue between music, art and gesture…

“Archaeology of the Present”… A perfect surname for the career of this artist, eclectic like few others, to sum up his aim to juxtapose Past and Present, Ancient and Modern, Conjectures and Certainties...

His emblematic faces with their perfect triangulation are surrounded by words, by lines from his songs, as though to protect the fragility of the faces, but at the same time to give them music, movement, dimension and life.

Works of a new pop realism, with innate gesture and rigor, with the flavour of a floral language, liberty, unfettered, free, art-nouveau, as well as poetic primitivism in his sculptures, typically in ceramic after the manner of the last Fontana, but also design with a utilitarian character typical of the Bauhaus but always full of poetry; carpets, performances and even more music.