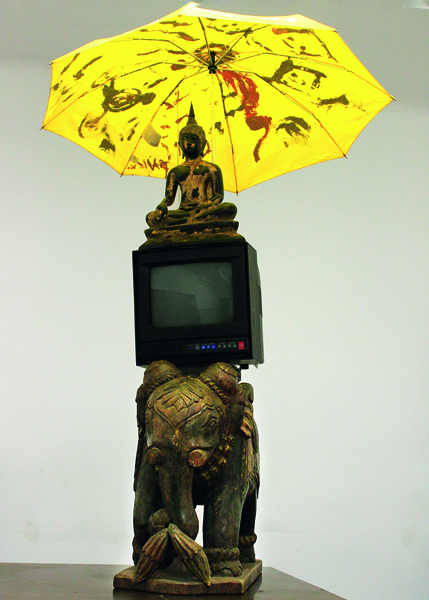 I interviewed Nam June Paik in Milan in 1988 when we were working on the television programme Publimania, he as director and I as a performer. It shows the continuity of his thought and his style, his devotion to Buddhism and to video art, for which he has often been called “The Father of Video Art”. Some of his favourite symbols appear in the work Hello Elephant: the Buddha watching the video and the elephant which in Buddhism is the symbol of the calm majesty of one who is on the way to Enlightenment.

My dear Buddha, I am pleased to meet you in Italy. What brought you here?

We are organising the biggest television programme in the world, which will unite twelve countries in a network of horizontal communication. Television has always been ontologically structured like a pyramid in a dictatorial fashion: one speaks and the other listen. I have written for an underground television where everyone can speak like on the telephone.

Among the pieces you produced for Publimania I particularly remember one with Buddha arriving on television. Hence the combination between the western and the eastern mentality. Yes, that concerns Italy. I was preparing an exhibition and I remember that there was empty wall I had to fill. [...] So I thought I would put Buddha near the TV camera. In short, Buddha watching television became a very popular symbol that is renewed in even more Asiatic terms in Hello Elephant.

Do you think that the individual, customised use of technological mediums like television, the TV camera, the video, stimulates individual creativity? Certainly. [...] I think that people who are creative and artistic are happy too.

What is your relationship with Fluxus?

Fluxus is a group of creative people who have got together and have always avoided any form of internal conflict. Fundamentally, it is a harmonious association.

So it was not an exclusive phenomenon.

Not at all, on the contrary it is very open. [...] Harmony has always reigned, as has friendship among all the artists. Fluxus is a harmonious association. This is very important, more important than the works themselves.