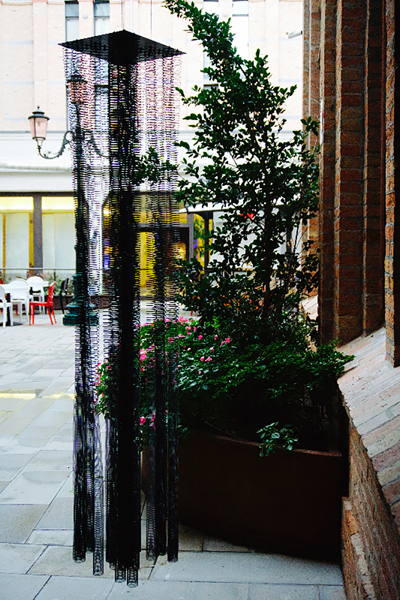 Piero Fogliati begins with scenographic painting, then turns to innovative sculpture, rich in unexpected sounds and noises. In the centre of his work there is the dynamic ideal of the Fantastic City: he thinks of transforming the repetitive, chaotic town planning of our cities, stereotyped and cumbersome, enriching them with his art works which have not only aesthetic, but also spiritual purposes. By dialoguing with them through images and sounds, sensitive inhabitants can rediscover their own authentic interior being, in harmony with their most secret self.

Here in Venice - along the itineraries of the exhibition-event OPEN 18 - we can try out the idea ourselves with the Fleximofono (1967), a sculpture in silicon steel (spring steel). It dialogues visually with us through the springs of which it is made, but also through sounds and noises. Its “metal curls”, touched by the wind, begin to move and produce unexpected and fascinating sound effects.

Then the Fantastic City begins to use atmospheric phenomena too as “noble materials”. Water, wind, sunlight, colour and sound become the primary elements that suggest a spiritual life to the Cities renewed by Art. Fogliati adopts complex technologies and lakes and rivers are provided with sounds; raindrops are animated with colours, while Fogliati also prepares machines for decorating the skies. With time his relationship with the natural phenomena of Light and its various ways of being reflected, as well as with Sound and colours, is enriched with new discoveries linked to the increasingly more profound use of new technologies. Fogliati is entranced by the fact that colours - which had been the leitmotif of his early days as a painter, in the form of pigments - can now assume much more extraordinary luminous variety, thanks to the use of electricity. Now, these apparitions with their splendid colours are not only fictitious because they can disappear when you switch off the light, but they can also gladden us when they reappear. And that is the way they are supposed to be, or so the artist seems to suggest, because life is a game that each one of us can reinvent to suit our own image and likeness, especially if we do it one connected to the other, dialoguing and rediscovering ourselves through Art.