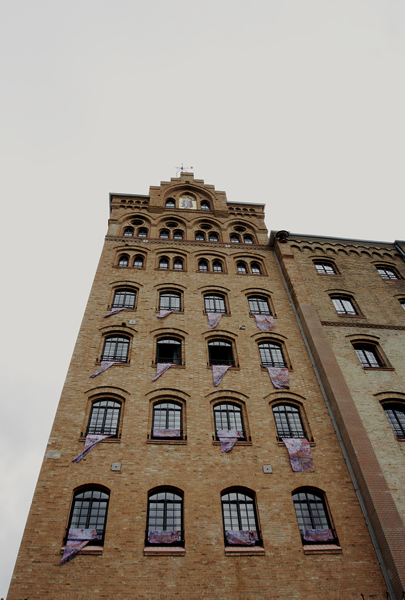 Stucky 9 may be considered a stage of a “journey” that began in Florence in August 2011, when the walls of the city became the starting point of this long and articulated tour with multifaceted outlines.

In each season the journey reaches a new town and its walls, after Florence came Venice, Burano, Rome and then London... Lille... until the latest journey to Beijing and the enigmatic Forbidden City in the centre, where the mysteries of a city that has always been isolated from the rest of the world reveals exciting stories in materials and colours.

In my shots - which form a collection of works on canvas in a large format, in limited editions – the code 9 contains all the compositional and symbolic geometries.

My work tells histories, captured by the lens and presented in a snapshot. The “macro” shots of the walls enhance the textures of plaster and colours, narrating the stratifications of life in the towns. Their transformation, deterioration, crumbling and reconstruction mark the passing of time. They are “urban skins” which, with their changing colours and cracks, superimpose colours and materials, telling the stages of their history. They are the urban fabric that weaves spaces and architectures, just like in the skin of a human being that vibrates, lives, absorbs and breathes all that surrounds it.

2015 - We are in Venice where, more than elsewhere, architectures are a treasure chest of memories, the interpretation of centuries, celebrations of journeys, guardians of history and stories. This is the background of the site-specific event Stucky 9. Photographs of the Stucky Molino, one of the most interesting examples of industrial architecture; in particular the shot of the only hidden portion of the wall that has not been restored, an untouched witness of human passing. The mill becomes an emotional tactile and visual space, where the colours of the wall, laden with specific features, produce the effect of flags from the pure architectural material with its fluctuating fabric, enveloping everyday events, like a new skin that, from the immaculate architectural material created by man, returns to man with the spontaneous scars that the salt, wind and waters leave in the brick. The texture is multiplied in fractal effects, enfolding the tower of the Stucky Mill to form a new material equilibrium. Flags like “walls” to all effects, which blend with the architectural context but which, when caught by the wind, reveal their natural identity if and when nature itself is allowed to act in harmony with the time that accompanies it.