FABLE OF CHEN WENLING
THE FIGHTING AND IMAGINATION IN CONSUMPTION SOCIETY 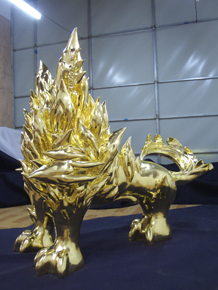 It is neither a beast nor a creature with spiritual power. It is an organism in mutation, a mixture of spiritual desire, beastliness and esoteric breeding. One may call it a species produced under multiple mixing and parasitic environment. One may also say it is a kind of unknown substance, still in the process of evolving. 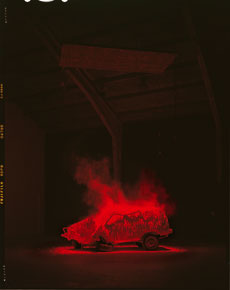 
Modernization is the first issue for China society, and in a way or two, artists are hard to escape from it too. Li Hui’s recent regards go to the multilateral conflicts between modern civilization and surrounding environment, under the circumstance of high-speed industrialization and urbanization. Although this is a repetition of old problem, attentions still need to be paid on this issue which is even going to change in China complex. Li Hui focuses his discussion on the relationship between human behaviours and exterior world. Bound and break loose, harmony and conflicts… are all the contrary elements contained in his works, which help contribute their innate power. The applied medias and materials range from bicephalous jeep, 3D sculpture model of the animal car, to stainless steel animal sculpture to laser cage, but all of them are either an extension to the sculpture conception, or the generalized representation of it. Trying to reach the limit of aesthetics, he has created contradictory, abnormal and beyond-experience visual styles, which is a determined reminding on the realistic problems of duality happened in the actual course of social development. The progress of a city may be determined by the environment; however, the environment can be changed by man to some extent. In the point of view of Li Hui, although at a high cost, we still have to progress further and further. Should it be the green nature accommodates itself to the modern civilization, or fast growing China society transforming to the big nature represented by the green world? Or regressing back to agricultural spirit homeland? Is there any possibility of balancing all of these? 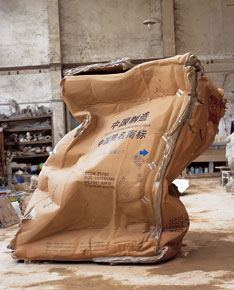 A Gift from Heaven

"REQUIEM FOR MATTER"
THE TRANSFORMATION OF MATERIAL BY JIAO XINGTAO 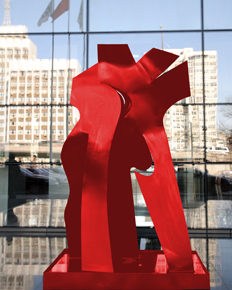