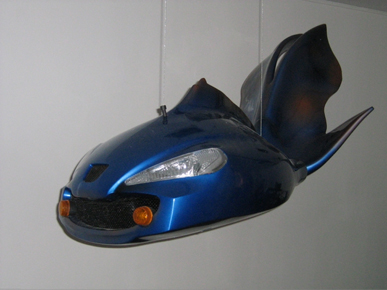 EVOLUTION OF CREATURE-MACHINES
THE ART OF ZHAO GUANGHUI

Zhao Guanghui (born 1972 in Yunnan Province, China) takes the prospectus of commercial car promotion as the model of his own prospectus for his mock vehicle designs. A vehicle the size of a Mini Cooper in the shape of a goldfish rumbling on shore is titled the "Nimi-Z", and its prospectus claims it is a wheel-less magnetic suspension racing car, the miraculous product of bio-technology and engineering. Another vehicle that looks like a cross between a sting-ray and a shark is called "Subaro - Imprezo";it is illustrated in its prospectus together with an array of engineering tools and an engine. They are the imaginary vehicles of tomorrow, the next step in the evolution of machines, when machines acquire a biological capacity to develop into more spectacular creatures. The biomorphic tendency of engineering products has long been the trend in the history of civilisation. When machines take over the tasks of domestic animals they also take over the animals’ special features of physical capacity that first fired human imagination. Ever since the advent of the industrial age, when new sources of energy were harnessed, engineering development has accelerated without looking back. We now know only the potentially boundless power and capacity of industrial products, and have lost sight of the limits set by nature on the powers of living creatures. We have also lost sight of the purpose of these powers, which were first there to serve specific biological ends. For the new urban generation that only knows animals first hand through pet cats and dogs, the sense of wonder at the special abilities of the animal kingdom continues to be sustained by wild-life programmes on TV and Digimon cartoons. For this generation Zhao’s wonder vehicles are not impossible engines, instead they would appear to be perfectly legitimate products waiting their turn in the production line. Even the impossible leap in technological solution does not always deter the expectation of the modern youngsters. Zhao looks forward to the next evolutionary step of machines, but his mode of thinking also prompts him to look backwards as well. He has created a series of works since 2005 titled "Excavated Future". In this series he presents bone-like fossil fragments covered in heaps of sand; the fossils turn out to be parts of a car, or parts of a computer. With this series Zhao takes us forward to the age when humans may look back at the pre-historic present to excavate the fossilised bones of our machines as modern dinosaurs. If this is the prospect of the evolutionary future of creature-machines, it does not necessarily mean this mode of evolutionary change is also a correct picture of the history of the animal world. The evolutionary premise of "survival of the fittest" implies that the biological world leaves us with the most fitting creatures; but this is an assumption that may not go unchallenged. Perhaps the traditional optimistic view of evolution of species is prompted by the observation of the evolution of machines, which become obsolete with changes in technology and human needs. Perhaps our reading of the world of living creatures has been unduly coloured by the idea of scientific progress, in which case Zhao’s creature-machines may serve as an amusing symbol of our age, and represent a fitting caricature of our collective imagination.