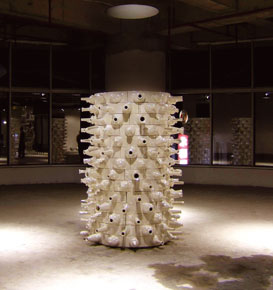 Since you left my Wet Embrace,

Klitsa Antoniou’s "Since you left my Wet Embrace" (2004), echoes a recurrent range of ideas permeating the artists’ work. The fluidity of time and memory, the unavoidable certainty of loss and the futile longing of sustaining the past are some issues that the work attempts to unfold. A peculiar well-like structure is built by an unorthodox collection of vessel-like bricks, handcrafted and treated individually. Over-glazed with ceramic mother-of-pearl, the vessel-bricks reveal protruding openings, curvy and smooth, which become both inviting and defensive, insinuating sexual analogies. Higher that the average human height the sculpture’s internal hollowness, although evident in its form, remains concealed and fortified from the viewer. A mirror placed on the ceiling- hovering above the sculpture reveals a warm red interior extending infinitely downwards. The well, built from vessel-like bricks, becomes an impossible container since the parameters of its form displace and cancel its function. A continuous condition of absence is established as the presence of water and fluid is constantly inferred, however the elements are never present. The concept of water embedded in the essence of the work encompasses the reiterating quality of memory, whereas, the dysfunctional, pitiless vessel emphasizes the infinite and unavoidable sense of loss towards things or people gone. The understanding of the perpetual mental process, of allowing the present to formulate and re-address the past, lies at the core of Antoniou’s work. The human capacity for recollecting, memory, is often perceived as a sum of concrete events and situations. Selective perception and recollection, however occurs according to "who" we came to be, allowing for a constant re-interpretation and re-writing of the past. Becoming aware of memory’s complex ability for alternation brings forth the aporia of a true understanding of the past, as truth itself seems to assume a painfully relative character. The alternating condition of human nature and perception evokes an unsettling feeling as one fails to affirmably recall the past. In order for the viewer to discover the work, Antoniou -typically, defines an interior and an exterior zone in her work, where the two zones engage in a conclusive dialogue. "Since you left my Wet Embrace", a title borrowed from a love song by Bjork, is in itself nostalgic and sad, suggesting the discontinuity of a narrative. The work becomes a painful comment to the incomplete and disturbing nature of rupture and loss in everyday life.