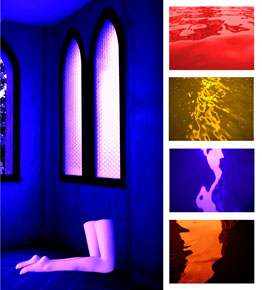 The chronicles of San Servolo tell of a monk who had gone crazy and was sent away from the island, but he kept asking to come back, to return to what he mysteriously defined, without any other explana­tion, as the “island of sound”. In a small building with a loggia, gothic windows and a bell-tower, Barbara Taboni has placed one of the two audiovisual installations created for this Creamintervention on the island. “Lustrale” (2008) awaits the visitor who climbs the old stair­case up to the loggia and the adjoining small terrace, a place where the height further accentuates the effect of this location surrounded on all sides by open horizons and the wind off the sea. It is here that a rippling water surface, processed and reproduced on the screen, is transformed into an abstract rhythm, accompanied by the sound of the waves, which in turn is processed again and changed into a bare­ly recognisable musical background: two simple environmental ele­ments, part of the place’s real features, chosen and reprocessed, accentuate and multiply the sensations experienced by the visitor during his journey and first contact with the island. Two manikins legs in kneeling position, a minimal sculptural element placed next to a gothic double-arched window, create a vague reference to the ico­nography of the Annunciation, focussing on themes of ecstasy, lis­tening and mystic revelation. The abstract stylised human figure of the manikin, and its multiplication in sequences, have for some time been one of the recurrent features in the work of Barbara Taboni. This also applies to the idea of a human body indicated by fragments, such as a series of casts of human feet, all different and identified, treated as portraits (“Standing Feet”, 2005), sometimes presented along with the video “Sacer Movie Feet” (2006), bare feet walking and sinking into white snow (the setting is in the mountains of the Val Camonica, where the artist was born), stressed by a sound track based on the crunching of snow, the sound of silence and whiteness muffled in space. In “Psyche” (2007), created for OPEN 10, a series of busts of female manikins standing like tombstones on the grass suggested, with their marble whiteness and regular arrangement, as well as with the idea of reflection indicated by the title, a vague sense of a commemorative monument; this was immediately modi­fied by the intervention of the public in this interactive installation, in which bags of wax crayons were provided next to each figure, so that visitors could carry out the intense and primitive work of trans­formation contemplated and welcomed by the artist as an integral part of the work. In its final appearance, “Psyche” calls to mind a cemetery vandalised by a world that has no more heroes, and which for this reason does not recognise itself in the monument, on which it leaves a trace through the violence of an action which can neverthe­less be defined as creative, if we literally accept Duchamp’s notion according to which “ce sont les spectateurs qui font les tableaux”…