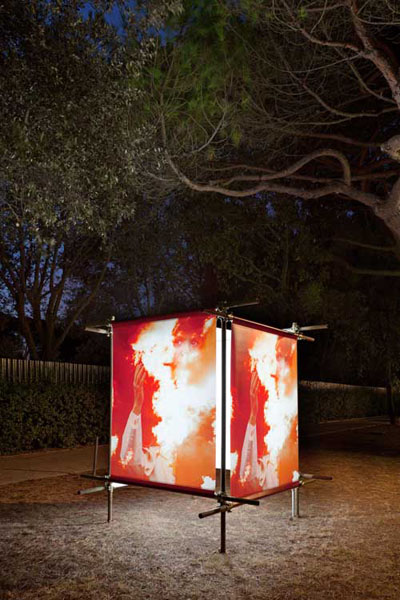 The installation His Holiness, presented here in Venice is part of a greater project, Violence in the name of God, which denounces the great crimes of the three major monotheist religions in the course of history. Tackling a project with a religious theme, in the complexity of its events, implies releasing truths hidden by the hypocrisy of those who choose to ignore the facts. Through the religious symbols my lens describes the paths of the believers, then penetrates, documenting violence, and finally expresses my rage, and like a weapon denounces those who, in the name of their creed, have legitimized violence. The world must know that truth exists. Behind my images is a thought, a concept that is tied to something that must change. In my image, the flames represent the punishment reserved throughout history by the Church to the victims of the Inquisition, and the photograph is inserted in a cube assembled with rough scaffolding tubes, as if to signify a prison. The installation denounces the shameful attempt by the highest echelons of the Vatican to cover up the sex crimes committed against minors by Catholic priests, especially in the United States. In this country, over 10.000 cases of sexual abuse have been documented, and were committed since the 50’s by those who were entrusted with the children’s moral upbringing. There is incontrovertible evidence that both Pope Giovanni Paolo II, and cardinal Joseph Ratzinger, now the current pontiff (who was named a defendant in lawsuit in Harris, Texas accusing him of obstruction of justice to cover up the abuse of three boys by a seminarian, because of the De delictis gravioribus epistle; he sought and obtained immunity from persecution as a Head of State), were fully aware of these terrible crimes since the mid 1980’s, but chose not to speak up for fear of the scandals which could hurt and weaken the Church. It took until 2008, during a visit to the United States, for Pope Benedict XVI to finally proclaim his deep shame at the sexual abuse cases. In spite of that, the greatest majority of the guilty priests have simply been moved to other dioceses, while the thousands of innocent victims are left to face potentially devastating psychological consequences for the remainder of their lives.